Embracing Kaizen: What We Can Learn from a Harlem Soup Kitchen

This year, instead of donating money to the NYC Food Bank, Toyota donated efficiency. Here’s how a few smart engineers transformed the job of feeding the hungry, and how you can use concept of kaizen to change the way you see your own challenges. 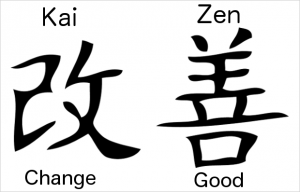 What the Heck is Kaizen?

Kaizen is a Japanese word that literally means “change good” and roughly translates to “continuous improvement.” It’s a concept that’s important in the Japanese work ethic, and likely has a lot to do with Japan’s successes in the technology industry.

Change in an organization usually comes from the top-down. Executives, managers, and supervisors are generally the ones we expect to initiate change. By virtue of their role, they are the ones responsible, right? And with the top-down model, when a change comes, it’s often a big change—a shift in policy, procedure, etc.

Kaizen, however, flips this association around. With kaizen, the process of change is expected to start with individual members of a team. It’s a matter of personal responsibility—if you notice something that’s inefficient and you can think of a way to improve it, you have a duty to share your idea with your team. Since change comes from the bottom-up, changes are smaller in magnitude and more localized in scope. But when every little cog of a big machine is constantly seeking to improve its own efficiency, magic happens on a much larger scale.

Toyota is one of the many large corporations that embraces kaizen, describing it as one of their core principles. Like many large companies, Toyota regularly makes financial contributions to charitable organizations. But this year they decided to try something different with one of their recipients, the Food Bank for New York City. Instead of donating money, they donated engineers to make the food bank more efficient. 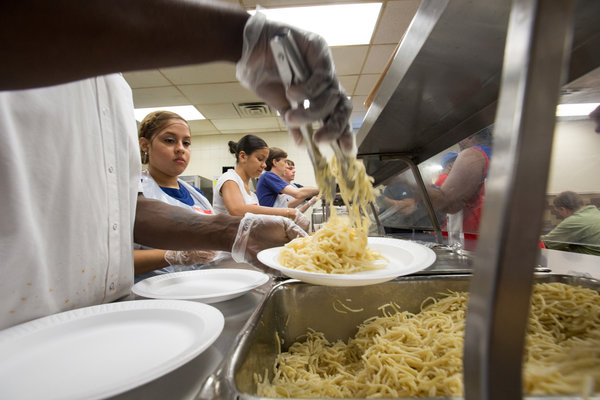 “Dinner at a Harlem soup kitchen, where engineers cut the wait time for dinner to 18 minutes from as long as 90.

Feeding 1.5 million hungry people every year is no small feat. And the Toyota engineers were initially met with skepticism. After all, how is building cars like feeding mass amounts of people? The engineers visited a soup kitchen in Harlem where they watched, studied, measured, noted, and—embracing the principles of kaizen—made suggestions for small, localized improvements.

Previously, diners would wait in line an average of 90 minutes to be served. But after engineers streamlined the seating & serving process with three simple changes, the wait time shrunk to just 18 minutes. (To read more about how they did it, check out this great article in The New York Times.)

Less waiting meant more people got fed every day. It didn’t cost anything extra, and no major changes were needed. Just a few localized tweaks made the whole system much more efficient.

Does Kaizen Come From Engineers?

Why didn’t the soup kitchen employees figure this stuff out on their own? After reading the article, some of the ideas the engineers implemented may have seemed rather obvious.

It’s possible that some of the ideas had indeed been thought of already, but maybe nobody felt empowered enough to speak up. Maybe everybody was too busy with their day-to-day responsibilities to step back and see the big picture. Or perhaps the old status quo just seemed “good enough.”

The Toyota engineers weren’t necessarily more capable of solving these problems because they were engineers. They simply had the kaizen mindset: that by paying attention, noticing small problems, and fixing them, the big problems wind up get solved.

You don’t need an engineering degree to think that way. You just need a change in mindset.

My personal journey with kaizen began before I even had the word in my vocabulary.

I work as a software engineer for a company with several hundred employees. Every year, we have a company meeting where we go over the usual financial numbers, corporate strategy initiatives, etc. But one of my favorite parts is the Q&A panel. Our executive team, including our CEO, sits up on stage, and anyone in the company can take the mic and ask a question.

A few years ago, I was growing frustrated with a particular module of our software that was difficult for me to maintain. The engineering team would receive regular bug reports in this area which hinted at big usability problems for our customers. The problem was that I really didn’t know how our customers were using this particular module. So I stood up at this Q&A session, addressed our CEO, and described my concern. 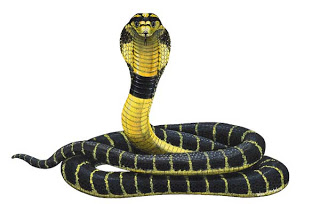 “Well Dave,” he responded, “what do you think we should do about it?”

For a moment, I was caught off-guard. Shouldn’t the CEO respond with his own strategic solution? Or at least delegate the issue to some manager who would address it?

Before I could run the words through a logical filter, they slipped right out of my mouth. “I’d like to visit some of our customers and watch how they use our software, so I’ll know what problems we should be solving.”

Our CEO smiled and responded, “You know, sometimes at big companies when we see a snake, we decide we need to form a committee about snakes. But really, we just need to kill the snake. So, Dave, just go kill the snake.”

So there it was. Although the word itself was never spoken, I was being told to embrace kaizen. Rather than expecting change to come from the top-down, it was my responsibility to make it happen from the bottom-up.

It was scary. It was empowering. And my career was about to transform in ways I could not possibly imagine.

Thoughts about technology and teaching Dave Cadwallader on Twitter